Top Democrats have criticised US secretary of state Mike Pompeo’s decision to speak at the Republican National Convention from Jerusalem, arguing the “highly unusual” appearance could be illegal.

In a break with precedent, Mr Pompeo, the top US diplomat, is set to address the party’s nominating convention on Tuesday night from an undisclosed location in the city.

Previous secretaries of state have stayed away from party political events for fear of undermining US foreign policy or violating the Hatch Act, which prohibits federal employees from undertaking political activity on the job.

Joaquin Castro, vice-chair of the House foreign affairs committee, sent a letter on Tuesday to Stephen Biegun, deputy US secretary of state, questioning the legality of Mr Pompeo’s appearance and said he was opening an official investigation into the matter.

Mr Castro said it was “readily apparent” that the secretary’s participation in the convention “may violate” the Hatch Act and state department policies.

In his letter, Mr Castro said Mr Pompeo “was on official travel — funded on an apolitical basis by every American taxpayer — when the speech was pre-recorded”.

Nancy Pelosi, the Democratic speaker of the House, called Mr Pompeo’s appearance “appalling”, while Joe Biden’s campaign said it was an “abuse of taxpayer dollars” that “undermines the critical work being done by the state department”. 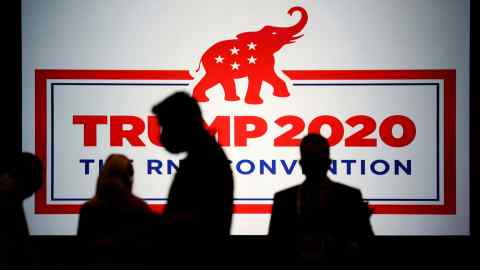 A former House member, Mr Pompeo was appointed by Donald Trump as director of the CIA before being tapped as secretary of state. He is widely seen as having political ambitions of his own is and often mooted as a potential Republican presidential candidate in 2024.

The state department did not immediately respond to a request for comment.

Mr Pompeo will tell the convention that Mr Trump has “led bold initiatives in nearly every corner of the world” to secure peace and “keep us safe and our freedoms intact,” according to a pre-released excerpt from the Trump campaign.

Mr Pompeo is not the only participant in this week’s Republican convention to come under scrutiny. Democrats have also questioned whether the president and his family are in violation of the Hatch Act for using the White House for Republican party business.

Melania Trump, the First Lady, will speak on Tuesday night from the White House Rose Garden, which she recently helped redesign. Mr Trump appeared at the White House during Monday night’s broadcast, and is expected to formally accept his party’s nomination from the South Lawn on Thursday night.

The president’s family members are a mainstay of this year’s convention schedule, which features a notable lack of speeches from establishment Republicans. Donald Jr, his eldest son, mounted a staunch defence of the president’s first term on Monday night, in which he accused the Democrats of being soft on crime. 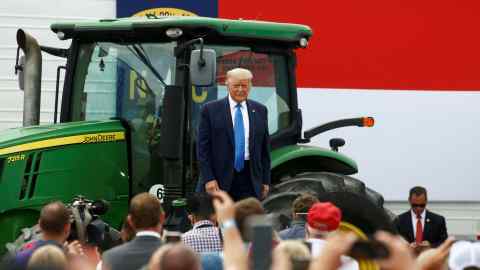 Donald Jr’s brother, Eric, will speak on Tuesday, while their sister Ivanka — who is married to Jared Kushner, a senior adviser to the Trump administration — is expected to introduce the president before he accepts the party’s presidential nomination on Thursday.

In her speech on Tuesday, the First Lady is expected to make overtures to female voters, with whom the president polls less favourably than men.

At an event to mark a hundred years of women’s suffrage on Monday, Mrs Trump praised her husband for increasing the child tax credit and appointing women to senior positions within his administration.

She said: “Since taking office, my husband and this administration have taken historic measures to empower and support women in the US.”

Mrs Trump, the president’s third wife, has kept a relatively low profile since Mr Trump took office, avoiding speeches and appearances in favour of staying behind the scenes with the couple’s 14-year-old son, Barron.

But putting the First Lady into the spotlight may have its electoral advantages. A Morning Consult/Politico poll out this week showed Melania Trump was more popular with independent voters than any other Republican speaking at the convention, with 44 per cent of independents saying they have a favourable view of the First Lady.

Tiffany Trump, the president’s only child from his second marriage to actress Marla Maples, also addressed the convention on Tuesday night. Ms Trump, who recently graduated from Georgetown University Law Center, has taken a much less active role in her father’s…

‘This is such a massive screwup’: UA shuffles student housing amid rising

Coronavirus live updates: CDC no longer suggests all close contacts need to get

Covid-19 Live Updates: News on Vaccines and the Coronavirus Variant

Tips for keeping food safe during a power outage