Madeira is beautiful, always warm – and back on the ‘safe travel’ list

Heed Travel Restrictions When Entering Bali or Risk Being…

Fans call Madeira the ultimate Treasure Island, a volcanic but verdant ‘floating garden’ carved by warm winds and set amid the wild waters of the Atlantic Ocean.

This little piece of Portugal rises up 300 miles off the coast of North Africa and it’s back on Britain’s quarantine-free travel list after a summer on the coronavirus naughty step. Better still, new direct flights make it the perfect place for culture, nature and late-season sun.

Culture comes courtesy of the island’s rich trading history. After making their first fortunes with timber, farmers in Madeira discovered the ‘white gold’ of sugar some 500 years ago. Profits paid for palatial homes furnished with works by Europe’s finest artists. Treasures are on display in the Sacred Art Museum in the main city of Funchal. Expect to see some of the world’s largest pieces of Flemish art, proving big was beautiful for Madeira’s first wave of art collectors. 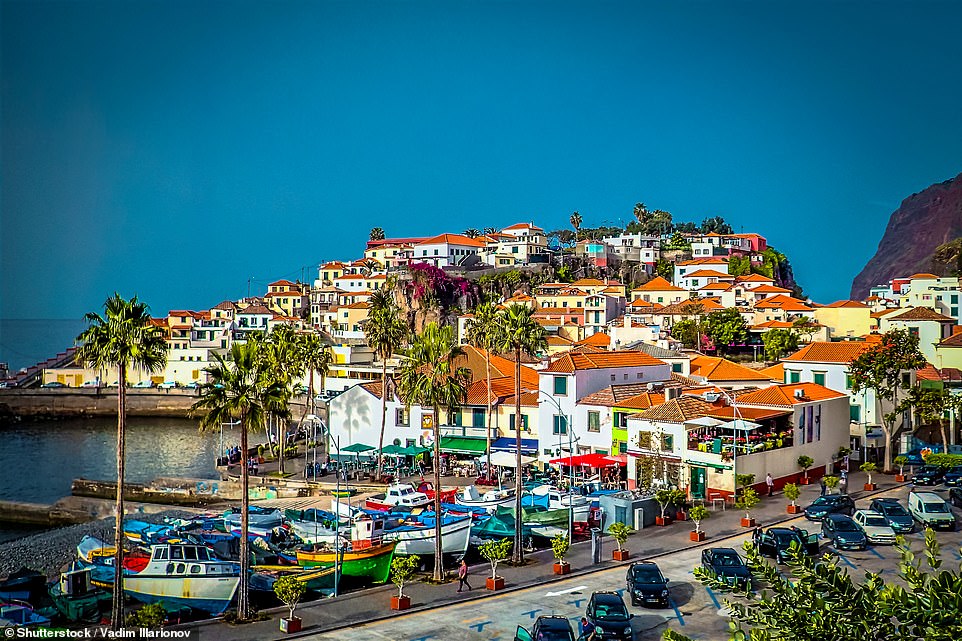 Atlantic jewel: The fishing village of Camara de Lobos outside the capital, Funchal

Head west to the Contemporary Art Museum on the cliff-edge, an award-winning concrete building that could double as a Bond villain’s lair. It has equally eye-catching exhibitions inside.

Or take a sense of humour to Madeira’s latest cultural ‘gem’, the CR7 Museum in Funchal, which displays the trophies (and unwittingly reveals the giant ego) of footballer Cristiano Ronaldo, one of the island’s most famous sons.

Art is on display all around the pretty streets of Funchal. Stroll across intricate designs built into black and white marble pavements that shine like silver in the sun (and get slippery when wet). Then hunt down ceramic tiles, another island speciality.

Soft blues, greens and yellows dominate the palette. Hundreds of tiles paint pictures on the walls of the Farmers’ Market (worth a visit for fresh food and a riot of flowers) and the peaceful Santa Clara Convent.

Then walk down the old town’s Rua Santa Maria, where artists have covered hundreds of wooden doors with brightly coloured designs. Even the parking meters and park benches are outdoor art exhibits showcasing designs from Portugal and beyond. 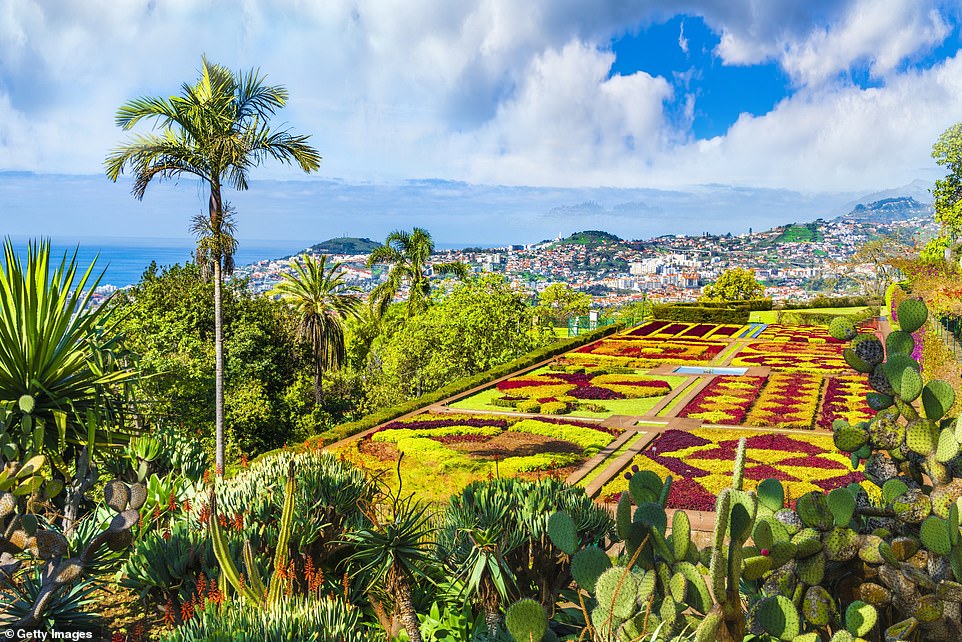 Flowers are everywhere in Madeira, says Neil Simpson. Pictured are the Tropical Botanical Gardens in Fuchal

Nature is Madeira’s other big draw. The warm Gulf Stream blows over its volcanic peaks bringing rain to the soils of the north and west (Funchal, in the south east, where most holidaymakers stay, is often mercifully dry).

Flowers are everywhere. Poinsettias and bougainvilleas bloom across the island alongside proteas, camellias, birds of paradise and orchids. Hiking alongside clifftops and looking back at the strings of white houses that cling to Madeira’s steeper slopes is a joy.

Or walk into the interior following the paths of the famous levadas, the wide channels dug to move water around the island in centuries past. A popular choice is Levada das 25 Fontes, which takes you past a 100ft waterfall (and many others) and through vegetation worthy of Jurassic Park. 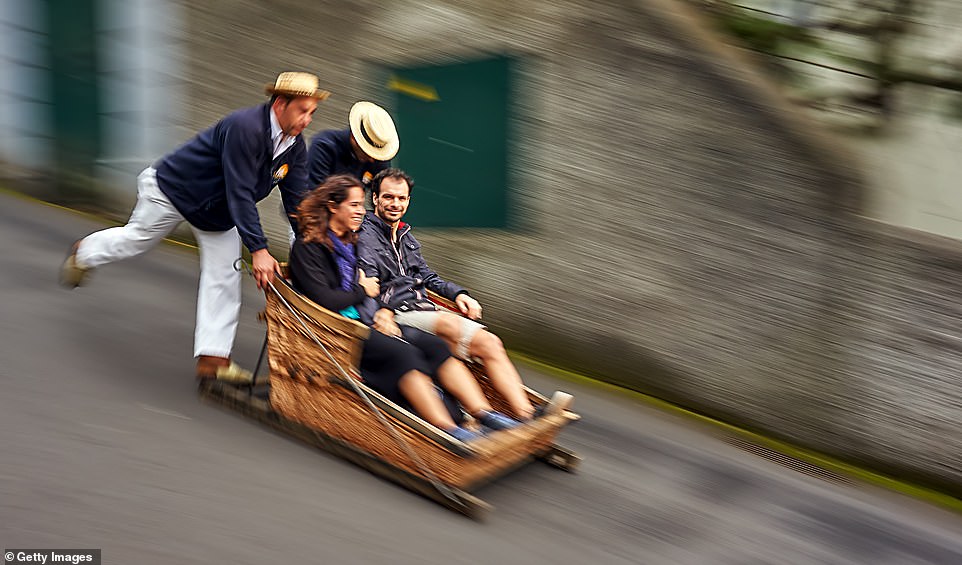 Don’t miss Madeira’s mad tradition: climbing into a wicker basket for a snow-free toboggan ride down a hill

In the east, the red-tinted volcanic cliffs near the Ponta do Furado viewpoint produce photos that look like the end of the world. Or sail to see the vertical pillars of ancient volcanic lava at Pico de Ana Ferreira.

Guides can take you around Madeira on small group or individual tours, though good quality roads mean it’s easy to explore it yourself in a rented car.

Better still, with cruise ships notable by their absence, Madeira’s beauty spots should stay crowd-free for some time yet. Got a head for heights? Climb through the clouds to the island’s highest peak, the Pico Ruivo. Then edge across the glass floor of the ‘sky walk’ that hangs over the edge of a 1,900ft cliff on the south coast or take a ride in one of Funchal’s two famous cable cars. For something completely different, you can’t miss Madeira’s mad tradition: climbing into a wicker basket for a snow-free toboggan ride down the hill into Funchal.

Direct flights from the UK to Funchal on Madeira take just under four hours with British Airways and easyJet, or you can fly via Lisbon with TAP Portugal.

BA Holidays has launched a September sale and offers flights plus seven nights in a four-star hotel from £489pp (ba.com/madeira) or take a seven-night ‘waterways and flowers’ self-guided walking tour from £845pp plus flights with inntravel.co.uk.

Once a clever way for locals to get into town, it’s been a fully fledged tourist experience for decades: Ernest Hemingway was a fan in the 1950s. Baskets fit two, rides last ten minutes and staff in straw boaters run alongside to steer you away from hazards.

Late-season sun is Madeira’s other big attraction and is practically guaranteed. The island is an all-year destination.

Temperatures rarely dip below 72F so drinks in sunny squares are…

Read More: Madeira is beautiful, always warm – and back on the ‘safe travel’ list

Government to commence development of health tourism in Bali: Thohir

Thinking of going to Boracay? Here’s what you need to know

Opinion: There was only one fraud in the 2020 election