Attorney General Avichai Mandelblit said Thursday that Prime Minister Benjamin Netanyahu won’t have to step down when his trial on corruption charges revs up in January.

“Starting in the coming months, the prime minister’s trial will be held at the Jerusalem District Court, with a high frequency of hearings… To me this fact in itself doesn’t establish any cause for the prime minister’s recusal,” Mandelblit said at a conference organized by the Israel Bar Association in Herzliya.

The attorney general stressed that while Netanyahu can continue to serve as prime minister, he must avoid any conflicts of interest whereby he could be seen to be attempting to use his political status to influence the criminal proceedings against him.

“It is permissible for him to serve as prime minister while on criminal trial, provided he is subject to the very clear restrictions of a conflict on interest arrangement, that deprives him of any possibility of influencing his personal criminal matters by utilizing the powers of his office,” Mandelblit said.

Netanyahu, who has long accused Mandelblit of weakly submitting to a plot by state prosecutors, police investigators, the media and the political left to frame him for corruption and thus force him out of office, has recently also been clashing with Mandelblit over whether he should be involved in appointing senior law enforcement officials. 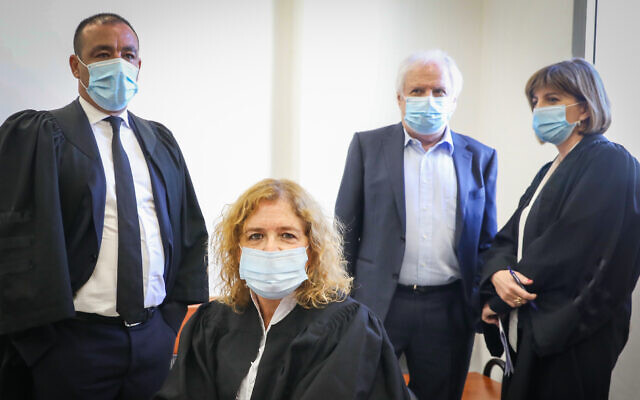 During an earlier stage of the Netanyahu cases, Mandelblit said the prime minister did not have to suspend himself “at this time,” but it was not clear then whether this decision would still apply when the trial gathered pace, and there had been speculation the attorney general could change his ruling later on.

The premier’s critics have argued that he will not be able to keep his total focus on the job when his trial picks up in January, with multiple hearings scheduled each week for witnesses to testify against him.

In the legal opinion he gave in April, Mandelblit said there was no legal obstacle to Netanyahu forming and leading the next government, despite the criminal charges against him.

That opinion was submitted to the High Court of Justice and later accepted during a hearing in front of an expanded panel of 11 judges.

“Despite [the existence of] significant difficulties that arise in this matter, they do not constitute grounds for judicial intervention,” Mandelblit wrote then with regard to the fraud and breach of trust charges that he himself in January filed against Netanyahu in three cases, with a bribery charge in one of them. 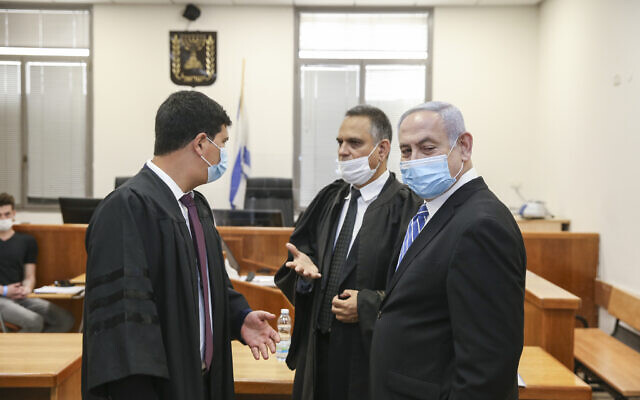 Prime Minister Benjamin Netanyahu on trial at the District Court in Jerusalem, on May 24, 2020. (Amit Shabi/POOL)

In July, Netanyahu launched a scathing, unprecedented attack against Mandelblit, whom he himself appointed and who previously served as his cabinet secretary, accusing the AG of being part of a deep-state conspiracy aiming to oust the premier for political reasons.

Nonetheless, Mandelblit said Thursday that he has continued holding regular meetings with Netanyahu to discuss a range of issues unrelated to his trial, and will continue serving at the pleasure of the premier and the government, even as the prime minister’s trial picks up.

Netanyahu appeared at the Jerusalem District Court in May for the start of his trial, making him the first sitting Israeli premier to stand trial on criminal charges.

The next court date in Netanyahu’s corruption trial is set for December 6. He will be in attendance for the final stage of preliminary arguments. Hearings will then speed up in January.

The prime minister has denied any wrongdoing.


Read More: Attorney general says Netanyahu won’t have to step down when graft trial revs up

In California, Latinos bear the brunt force of the coronavirus

‘America is back’: Biden unveils first cabinet members to ‘reassert’ US as

What we know about AstraZeneca’s head-scratching vaccine results.