How Bali tourism could be crushed by Australia’s latest… 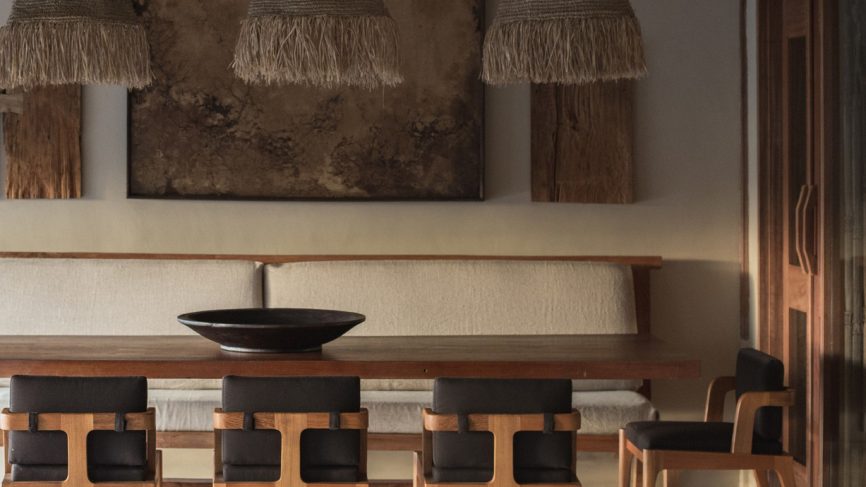 A painting by Maximilian (founder of Studio Jencquel), wooden bowl by Cloth By Medina, central table created from a bed frame, vase made by artisans from the Timor Island

On the outskirts of Ubud, in Bali, Indonesia, away from the hustle and bustle of the city, is this tranquil, ecological reserve for the Hindus—this is also where two rivers meet. The Campuhan Ridge Preserve, which still retains the charm of a bygone era, is a source of inspiration for countless artists and creatives. With this fascinating natural setting as a backdrop, Maximilian Jencquel, founder and director of Studio Jencquel, envisioned the Rumah Purnama villa which translates to “the house of the full moon” in Bahasa (Indonesian language).

The mystical context of the landscape inspired the home’s design. “The restoration process revealed the bare bones of the 100 year old home. While digging, we found a carved wooden sculpture, which we restored, and a python with 12 eggs which, according to Hindu beliefs, represents the reincarnation of the owners’ ancestors. In essence, this house is the continuation of a love story that began more than 100 years ago between a magical place on Earth and the people who fell in love with it,” says Maximilian.

Focusing on the breathtaking views and the local context was priority during the restoration. From the outside, Rumah Purnama blends in seamlessly with nature, largely due to its material palette of natural materials such as tropical wood and an alang-alang roof.

The original structure of wantilan (traditional pagoda, Balinese style) was retained, as a way of preserving Ubud’s cultural heritage. The two-story volume faces east, where the moonrise is framed behind the jungle and, to the northeast, you can view the sacred Gunung Agung volcano.

A small traditional Balinese gate—known as angkul-angkul—marks the access to the property, followed by a garden and path leading to the Zen stone stairs (surrounded by bamboo) and finally to the main gate. The hall acts as a transitional space between the main room, the dining room, the guest room and the powder room. Through glass doors framed with wood you can appreciate the pool and views of the jungle. Stairs lead directly to the living room, where Bangkirai’s amber-clad walls and floors create a cozy cottage feel.

Read More: Find out how a 100-year-old mystical Bali home was carefully restored

I thought battling an eating disorder during an election year was tough. I had

How Bali tourism could be crushed by Australia’s latest restrictions

‘Social distancing is NOT optional’

When you can expect to see election results in Sacramento County

When Early Voting Starts in NYC and What to Expect