Strange and foreboding orange skies and a layer of falling ash greeted Bay Area residents as they woke on Wednesday, rubbing their eyes and wondering if they’d awoken on a different planet — and pondering just how long the daylight dimness would last.

Some figured they were dreaming and went back to bed. Some students slept through the start of their remote learning classes because it was still dark outside. And at least one father told his children they had moved overnight to Mars.

In all, the surreal conditions seemed to punctuate an uncanny year beset by a pandemic, social unrest and, most recently, the environmental calamity of the wildfires.

“Pretty much all the customers have the apocalypse on their mind. It’s a metaphor for our current plight,” said barista Leah Lozano, who was taking out the trash in the morning darkness at a coffee shop on West Portal Avenue.

The ominous pallor of the skies, experts said, were a product of the plumes of smoke billowing from the historic number of wildfires burning across the state. Wind conditions overnight pushed smoke into lower elevations, filtering sunlight and producing dark tints of red, orange and gray. Still, air quality remained mostly unchanged.

And could throughout the day and into tomorrow.

“Not a lot of change is expected,” said Ralph Borrmann, a spokesman for the Bay Area Air Quality Management District.

Conditions were similar all over the Bay Area, and seemed to be the only thing anyone could talk about. For many, the other-worldly light passing through the gauze of wildfire smoke conjured images of apocalyptic lands from fiction and film.

“It feels like the end of the world, or like Mordor. But I guess it’s just a weird mix of smog and smoke and haze,” said Catherine Geeslin, snapping cell phone pictures of the dark sky in West Portal in San Francisco. “It was alarming to see it’s still dark. And it will be strange to have lunch in the dark. But you still have to get on with your day.”

Sitting in front of a San Francisco coffee shop, Bob Kovash of San Francisco, was sipping coffee, eating a bagel and marveling about the daylight darkness.

“It’s like another world,” he said. “I had to check my clocks to make sure they were working. When you expect it to be light and it’s dark, well, that’s a big deal.” 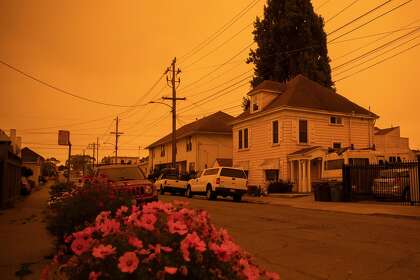 Hours after sunrise, it still seemed like dawn outside. But despite the smoky skies, there was no scent of smoke over most of the Bay Area, and the air quality in most areas was either good or moderate, according to Bay Area Air Quality Management District sensors.

Fires are to blame, of course, but not a specific fire, said Roger Gass, a National Weather Service meteorologist. Since August, more than two dozen fires are burning in California with dozens more in Oregon and Washington state, and all are spewing smoke into the skies.

“We have to think in the grand scheme,” he said. “It’s not just the fires in our backyard that affects the smoke over us. We’re talking about so much smoke in the atmosphere.”

Strange waking up to yellow skies. And not smelling smoke. #BayArea #wildfires pic.twitter.com/m2T2CpLdhC

This is what the sky looks like where I live. For reference, it’s 9AM and I just woke up. Initially it was so dark I thought it was 5AM before I looked at a clock. pic.twitter.com/V3gAgprZHK

On top of the staggering volume of smoke pumping into the atmosphere, strong winds from the north and north east pushed the smoke into lower elevations.

“That’s why we’re seeing more near-surface smoke than yesterday, when most of…

Coronavirus: ‘We must act’ to prevent second lockdown, says PM

Trump will pardon himself if he loses the 2020 election: Michael Cohen

White House chief of staff Mark Meadows: ‘We are not going to control the

US Coronavirus: US hits second-highest day of new Covid-19 cases

Opinion: Whoever wins in November is going to have to solve the Covid-19 crisis