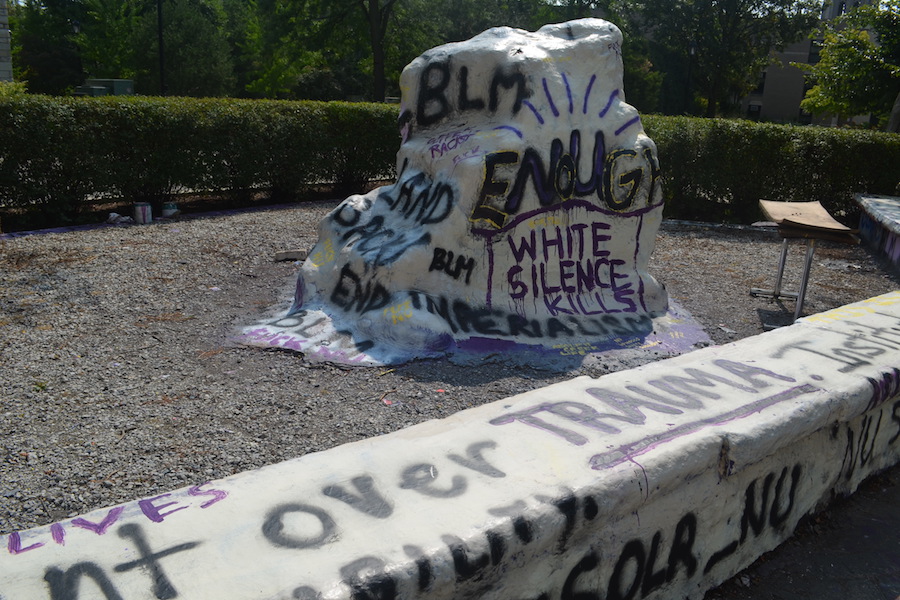 The Rock. After “White Silence Kills” was painted over with “NU,” students painted it to say “enough.”

For three months over the summer, the Rock had the same three words painted on it — “White Silence Kills.”

The message, painted during the last days of May, was accompanied by writings on the low wall in front of the Rock that read “Who do you call when the police murders?” “#BLM,” “Say Their Names” and “Justice for George Floyd.”

The May painting of the Rock came less than a week after the death of George Floyd and coincided with nationwide protests against police brutality and in support of racial justice. The message remained on the Rock all summer, though many students were not on campus then to see it.

On the night of Sept. 5, during the time many students were returning to Evanston, the Rock’s calls for racial justice were painted over. The wall was left plain white with no text, and the Rock, painted white, read “NU” in purple letters.

Communication junior Kandace Mack said to paint over the previous message in such a way was “insulting” and “erasure at its most obvious.”

“I’ve always thought of the rock as a representation of what is going on on campus and what the students are thinking about, and I don’t think that we were done thinking about that,” Mack said. “To have it painted over was a silencing that I wasn’t comfortable with, so I wanted to come back even louder with a rock that had everything we’re thinking about.”

The following weekend, a group of students including Mack painted the Rock again, but this time, they did not paint over the previous message before adding their own. They kept the white base and purple “NU” but added letters to make the Rock say “Enough.” The message “White Silence Kills” was repainted, along with “You can’t paint over trauma” and several references to the Black Lives Matter movement.

“Living life as a black person is digesting trauma every single day, for me. So painting over that and saying we’re done with this conversation, it implies that trauma is not valid anymore,” Mack said. “I just wanted to say that you can’t paint over it, it will always be here, and we’re not done having this conversation.”

Other text on the Rock and on the surrounding wall calls attention to other movements at Northwestern and nationwide.

One another side of the Rock, there are calls to “defund,” “disband,” “abolish” and “disarm” University Police. This follows a series of actions from student activists demanding the University divest from UP and invest in organizations that support black students.

These actions include a June 3 petition and a June 19 protest led by NU Community Not Cops, as well as several conversations over the summer between administrators and student activists. The University has since made commitments to reevaluate the police presence on campus but not to divestment.

Also on the Rock are calls to abolish Greek life, which students have increasingly called for since the creation of the Abolish NU IFC/PHA Greek Life Instagram account. The account allows students to share stories of their experiences in NU Greek life and encourages them to take action toward abolishing Greek life.

Mack said though the Rock is not big enough to fit everything that students are thinking about, this recent Rock allowed many students to display their beliefs. She said it’s important as students walk around campus to consistently think about issues that affect “every group” in the campus community.

“I think that’s well represented on the Rock, a lot of issues that are affecting different identity groups,” she said. “We want to have these conversations and we want to keep working to better our world, and our tiny world at Northwestern.”

SCHOOL DISTRICT OF LANCASTER students will soon return to classrooms

Student achievers from the Capital Region

Our biggest takeaways from 2020