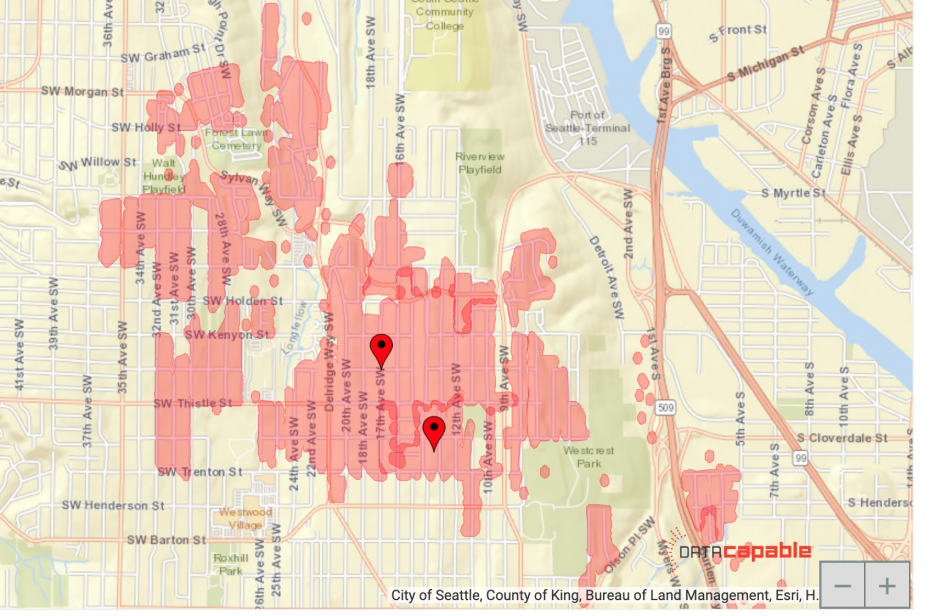 10:35 PM: Map added above. … The SCL map counts this as two outages, totaling more than 5,200 homes/businesses. Though no cause is officially identified yet, you’re probably well aware it’s a blustery night.

10:49 PM: Multiple reports of a flash seen/boom heard about the time the outage began, but there are no fire calls in the area, so haven’t heard any verification of that. Meantime, a couple standard power-outage reminders:

-If you have to drive, flashing or dark signals = 4-way stops
-Don’t open your fridge/freezer – if it’s a long outage, that’ll increase the time its contents can keep without spoiling
-Don’t get fixated on whatever ‘estimated restoration time” you see on the SCL map. That’s literally a guess, and seldom related to what actually happens. Could be back much sooner OR much later.

11:02 PM: Updated the headline to note that part of South Park is out too.

11:26 PM: Don’t know whether it’s cause, effect, or coincidence, but an SFD engine is checking out a reported power pole problem in the 7300 block of 19th SW. … (Minutes later) They couldn’t find the reported arcing wires, so they’re closing the call. Still no official word from SCL re: the problem.

12:14 AM: More are reporting restoration as of a few minutes ago. The map usually lags so we’ll see shortly how many. … Update: Now down to about 1,900 still out. UPDATE: Power outage overnight now down to around 1000…

Miners trapped underground in Wallace due to power outage

8 Hurt After NYC Tandem Bus Veers Off Road, Leaving Front Half Dangling Off