Science minister backtracks on plans to quit over lockdown

After war between Ron DeSantis and Nikki Fried, Annette…

Eyes on Pelosi as Trump impeachment trial timing up in the…

Science and Technology Minister Izhar Shay backtracked from plans to quit the government in protest over lockdown rules late Thursday.

The Blue and White party minister had been set to announce his resignation after a stormy cabinet meeting during which limits on protest attendance were approved, according to reports. However after meeting with faction head Defense Minister Benny Gantz, the party put out a statement saying that Shay had decided to remain on board.

According to the party, Shay and Gantz met over Zoom and discussed their shared values and their commitment to reducing divisions within society,

“I joined the party to implement together with the head of the party our shared values, foremost love for Israel, unity and national reconciliation. We will continue to work together for all Israeli citizens and the State of Israel,” Shay was quoted saying in the party statement.

Shay, who will continue to be the party’s point-man on virus-related matters, was reportedly incensed by the way the cabinet moved to approve the tightened lockdown, as well as Prime Minister Benjamin Netanyahu’s insistence on shutting down the economy, which critics say was only done to justify clamping down on protests against him.

Gantz had asked Shay to hold off on the move and not submit his letter of resignation until the two had met, Hebrew media reports said earlier. 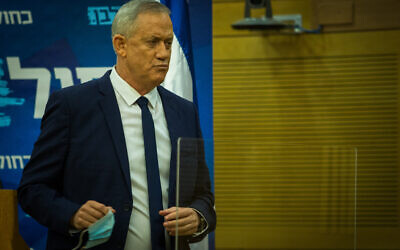 Defense Minister Benny Gantz delivers a statement to the media at the Knesset, on August 24, 2020. (Oren Ben Hakoon/ Flash90)

Shay stormed out of a cabinet meeting early Thursday in protest to it taking a vote on the increased lockdown measures, Hebrew media reported. The cabinet eventually authorized the measures and passed its proposal on to the Knesset which was also expected to grant approval.

As of 4 a.m., the Knesset had approved the measure on first reading, sending it to committee ahead of second and third readings for a final okay.

The updated measures are set to come into force on Friday at 2 p.m, and will see nearly all businesses closed, prayers and public protests severely curtailed, public transportation scaled back dramatically and Israelis ordered to remain close to home with fewer exceptions than in the existing lockdown.

According to the Ynet news site, Shay was angered that the vote to approve tightening the lockdown was brought to the government before the so-called coronavirus cabinet reached a decision.

“It’s important the government ministers know the decision on a full lockdown, more severe than the one we experienced in March, was not made by a vote in the coronavirus cabinet,” he was quoted as saying ahead of the government vote.

Shay noted health officials argued such strict lockdown measures weren’t needed at this stage and cited a Finance Ministry forecast that the new restrictions could cost the economy over NIS 30 billion.

He also said the purpose of the new restrictions was to stop the ongoing protests against Prime Minister Benjamin Netanyahu, which the premier had pushed for, and encouraged Blue and White ministers to vote against the proposal to limit demonstrations and religious services.

“During two days of long deliberations in the coronavirus cabinet we wasted… endless time on what divides us and not what unites [us],” Shay said. “We were swept away with debating a futile, divisive and unnecessary argument about demonstrations instead of talking about a safe outline for prayers, the minute details of the economy and about the elderly and everything that is really needed.”

The government’s coronavirus czar Ronni Gamzu said he had also opposed the measures.

“I recommended a [slight] tightening of the lockdown, but the government decided otherwise and I respect that,” Gamzu said during a tour of Jerusalem’s virus-hit hotspots on Thursday. 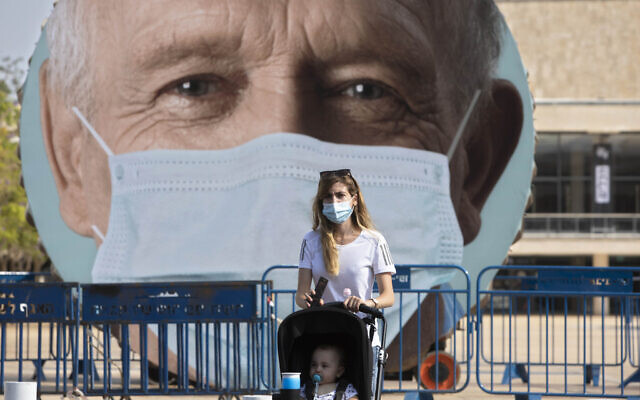 Netanyahu later on Thursday defended the lockdown saying it was a justified by the need to save lives.

“The lockdown steps aren’t easy but saving life comes before everything,” he said during a press conference at the Prime Minister’s Office in Jerusalem. “We’re at the height of an ongoing war.”

Netanyahu rejected the notion that he had sought the full lockdown to halt politically damaging protests, arguing that “these anarchist and ludicrous protests” actually help him politically, but “the public is sick of them.”

Israel currently has one one of the highest morbidity rates in the world, recording nearly 7,000 new cases for several days running this week. Of the 61,924 active patients, 685 are in serious condition with 172 on ventilators.

If confirmed as labor secretary, Boston Mayor Marty Walsh will be one of few

Trump’s turbulent and lawless presidency will end with historic second

8 Hurt After NYC Tandem Bus Veers Off Road, Leaving Front Half Dangling Off