Hall of Fame pass rusher Fred Dean, whose acquisition in a trade by the 49ers during the 1981 season served as the springboard to their first Super Bowl title, died Wednesday night at 68.

Last week, former 49ers safety Dwight Hicks posted on Facebook that Dean, his former teammate, had been hospitalized with the coronavirus.

“The entire Pro Football Hall of Fame family mourns the passing of Fred Dean,” HOF President and CEO David Baker said. “He exemplified many of the values learned from this great game – commitment, integrity, courage – over the course of his life. Our thoughts and prayers are with Fred’s wife, Pam, and their entire family. We will forever keep his legacy alive to serve as inspiration for future generations. The Hall of Fame flag will be flown at half-staff in Fred’s memory.”

“Fred was the biggest catalyst by far,” defensive tackle Jim Stuckey told The Chronicle last year. “Until we got Fred — I mean, he elevated everyone else’s game and could just destroy people. It changed up an offensive game plan. For us to be able to get him, it set us apart. He was a game changer.”

Dean’s impact in 1981 was immediate and awe-inspiring.

In his 49ers debut, he terrorized quarterback Danny White throughout a 45-14 win over the Cowboys, a team that had beaten the 49ers 59-14 a year earlier.

The game was played a season before sacks became an official NFL statistic, but Dean had 2.5 sacks, nine quarterback pressures (seven hits) and drew two holding penalties in 31 snaps based on a review of the game last year.

“He might have had (more) sacks, but the fellow blocking him kept grabbing his face mask,” Bill Walsh said the day after the game. “That was the only way they could block him.”

In the 1980 win over the 49ers, White threw for four touchdowns and posted the highest passer rating (147.5) of his 92-start career. In 1981, when Dean had two sacks and a quarterback hit on one three-play sequence, White posted the lowest passer rating of his career (19.8). 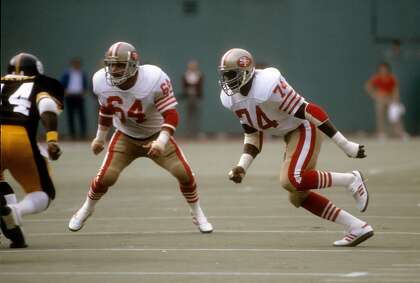 “Wow, I saw (Hall of Famer) Alan Page against Detroit in a game up in Minnesota one time … dominate something like this,” CBS announcer Pat Summerall said during the game. “But other than that, I can’t remember seeing it done.”

Dean was listed at 6-foot-3 and 230 pounds, light even by that era’s standards, but flourished with explosiveness and strength that didn’t come from weight lifting. Last year, Stuckey recalled Dean smoking Kool cigarettes during his rare visits to the weight room.

“Every now and then, I get an urge to lift weights,” Dean once said. “… And I just go somewhere and lie down until I get over it.”

Oli sparks speculation by keeping defence ministry with himself in Cabinet

Michigan vs. Minnesota score, takeaways: No. 18 Wolverines run through

Manchester City’s problems are obvious, but Pep Guardiola can’t do much…

Special Cabinet meeting in Putrajaya meeting over, Barisan MPs head over to PWTC

Fights Erupt During ‘Jews for Trump’ Rally in Manhattan